ALBANY – A veteran member of the Assembly from Buffalo ascended Monday to one of the top positions in the state Legislature, giving both her and the region increased leverage in Albany at a key moment for upstate.

Assemblywoman Crystal Peoples-Stokes, 66, was named as the next Assembly majority leader, the number two leadership post in the 150-member chamber and one from which she can wield influence over fiscal and policy initiatives.

“It’s daunting in some ways … and it’s exciting at the same time," Peoples-Stokes said in an interview shortly after Assembly Speaker Carl Heastie, a Bronx Democrat, selected her as majority leader.

The appointment, which was Heastie’s alone to make, comes as Western New York is seeing its political power diluted in Albany following the takeover of the state Senate by Democrats. Currently, five Republican senators from the region are in the majority party controlling the Senate; in January, there will be just one Democratic senator – Buffalo’s Sen. Tim Kennedy – in the majority for a region from central New York westward once Democrats take control.

The new job for Peoples-Stokes was not lost on people already concerned about that loss of influence in the Senate.

“Downstate really dominates the agenda. To have someone like Crystal, who really gets Buffalo and all of Western New York and upstate, is probably the best leverage we’re going to have to have any upstate influence over Albany. That may be slightly overstating it, but I don’t think so," said Dottie Gallagher, president of the Buffalo Niagara Partnership.

Peoples-Stokes, a product of the Buffalo public school system and SUNY Buffalo State College, becomes the first woman and the first African American to serve as Assembly majority leader.

The job’s principle duties entail running the floor operations for the majority party in the Assembly, rounding up votes and keeping rank-and-file Democratic members reasonably satisfied that their issues and bills are being addressed. But the position also puts its occupant into a leadership role, which will place Peoples-Stokes in key closed-door meetings with Heastie when any assortment of policy, budget and political matters are being decided.

Peoples-Stokes, 66, first came to the Assembly and the 141st District after being elected in 2002. She was competing for the Majority Leader spot against Bill Magnarelli, a Syracuse-area Democrat, and Donna Lupardo, a Democrat who represents a Southern Tier area. The Buffalo Democrat succeeds Joseph Morelle, who was elected to the U.S. Congress after the death of longtime Rochester Rep. Louise Slaughter.

For decades, the downstate-dominated Assembly has elected a Democrat from New York City to serve as Speaker. In turn, those top leaders have turned to an upstate Democrat to hold the majority leader’s post.

In October, Heastie told The Buffalo News that Peoples-Stokes is the “ultimate team player” and a legislator who “I can rely on and depend on." On Monday, in a written statement, Heastie said he has seen “firsthand how hard she works for the people of Buffalo and for families across our state.

“Crystal is a trusted colleague who I have known for many years, and her experience and dedication to improving the lives of all New Yorkers is why I know she will make an ideal partner in leading the Assembly Majority. Crystal is widely respected by her colleagues and I am proud to appoint her as the next Majority Leader of the People’s House," he added.

In her own written statement, Peoples-Stokes talked of her experience in the Assembly promoting issues “regardless of ZIP code, school district, race or background.”

In an interview, though, she acknowledged the new post can be helpful to not only Buffalo but the broader region. “Absolutely, because at the end of the day I do represent Buffalo and Western New York and I cannot lose sight of that," she said.

The lawmaker said she will still continue to press ahead on issues she has championed, whether it’s sealing criminal records of those arrested for low-level marijuana offenses or having the Buffalo school board elections moved from May to the regular election day in November in order to encourage voter participation. She has also been a tireless advocate of expanded public contract opportunities for minority- and women-owned businesses.

But Peoples-Stokes was already sounding like a majority leader, whose first task is loyalty to the Assembly speaker. “My priority will be to support the speaker and moving forward the agenda of the entire Democratic conference,’’ she said.

The Buffalo Democrat noted her days serving as majority leader of the Erie County Legislature. “My ability to get along with everyone and to build coalitions toward compromises is something I’ve always prided myself in being able to do. I just think my skill set bodes well for this type of position," she said.

Erie County Executive Mark Poloncarz said that he, especially, welcomes someone in the Assembly job with a background in county government.

Poloncarz recalled how Paul Tokasz, the former assemblyman from Cheektowaga, was an influence when he served as Assembly majority leader from 2001 to 2006. He said it can only help the region to have someone “in a position of strength and influence” in the Assembly “to ensure our region gets its fair share" when it comes to state funding to provide any range of services or for infrastructure improvement programs.

The appointment of Peoples-Stokes Monday as majority leader comes a week after Kennedy, the Buffalo senator, was named chairman of the Senate Transportation Committee, a panel that helps drives billions of dollars in infrastructure decisions.

“It certainly bodes well for our region to have not only Assemblywoman Peoples-Stokes become the next majority leader but for Tim Kennedy to rise as the next transportation committee chairman. Those are two huge positions in state government, and Assemblywoman Peoples-Stokes is now one of the most influential people in all of New York State government, not just the Assembly," Poloncarz said.

Peoples-Stokes, who comes out of Buffalo’s Grassroots political club, first came to the Assembly after being elected in 2002. She had tried two years earlier to defeat then Assemblyman Arthur Eve in a party primary, but lost to the veteran Buffalo Democrat. He retired two years later and she was elected to serve the district heavily based in the eastern part of the city.

Peoples-Stokes has served as chair of the Legislative Women’s Caucus, a group composed of female members from both parties, and the New York State Association of Black & Puerto Rican Legislators.

She has also enjoyed warm relations with Gov. Andrew M. Cuomo; she served as a co-chairwoman of his 2014 re-election campaign. This past year, as chair of the Assembly governmental operations committee, she was criticized by some government watchdog groups for not pressing her own legislation to restore financial oversight authority to the state Comptroller’s Office over certain economic development programs run by the Cuomo administration.

Peoples-Stokes is married, and is not shy about discussing her faith; she is a member of Buffalo’s True Bethel Baptist Church and St. Luke’s AME Zion Church. “God has prepared me for this moment," she said Monday.

“I have seen her live her faith,’’ added Lt. Gov. Kathy Hochul, who has known the new majority leader for a couple decades and recalls Peoples-Stokes working on efforts to get more women involved in politics back in the 1990s.

Hochul said the assemblywoman has been an advocate for increased state spending on the downtown Buffalo medical campus, various workforce training initiatives and efforts to ensure jobs for East Side residents in various state-funded projects.

Earlier this year, when there was backroom political swirls about efforts to try to bounce Hochul off the ticket as Cuomo’s running mate, Peoples-Stokes organized a gathering in Albany of female Democrats from upstate and downstate to stand by Hochul’s side. “She has been a steadfast friend and I count on her loyalty. Her word is her bond," the lieutenant governor said.

The majority leader position will pay Peoples-Stokes a base salary of $110,000 in January, rising to $130,000 in 2021 – up from the current base salary of $79,500. A state compensation commission last week bumped up the base salaries for state lawmakers. In addition, Peoples-Stokes will be one of the few members of the Legislature to also get an annual stipend for a leadership post. In her case, the job provides an additional $34,500 on top of her base salary.

Peoples-Stokes had been quietly campaigning – with just one voter in the matter: Heastie – since this spring when Morelle said he was leaving the Legislature to seek the congressional seat. “I didn’t advocate or lobby or seek this job out," Peoples-Stokes insisted Monday.

“The advantage is you’re in the room when major decisions within the (Democratic) conference are being made … I think it would be a huge advantage for Western New York and the region," Tokasz said a couple months ago about the prospects of Peoples-Stokes becoming majority leader.

“She’s worked very hard to continue to be a leader in this community and I think now she’ll be able to present not only a Western New York but an upstate voice for many of the issues that continue to be important for our community," he said.

Join us for the 15th Annual Crystal Ball 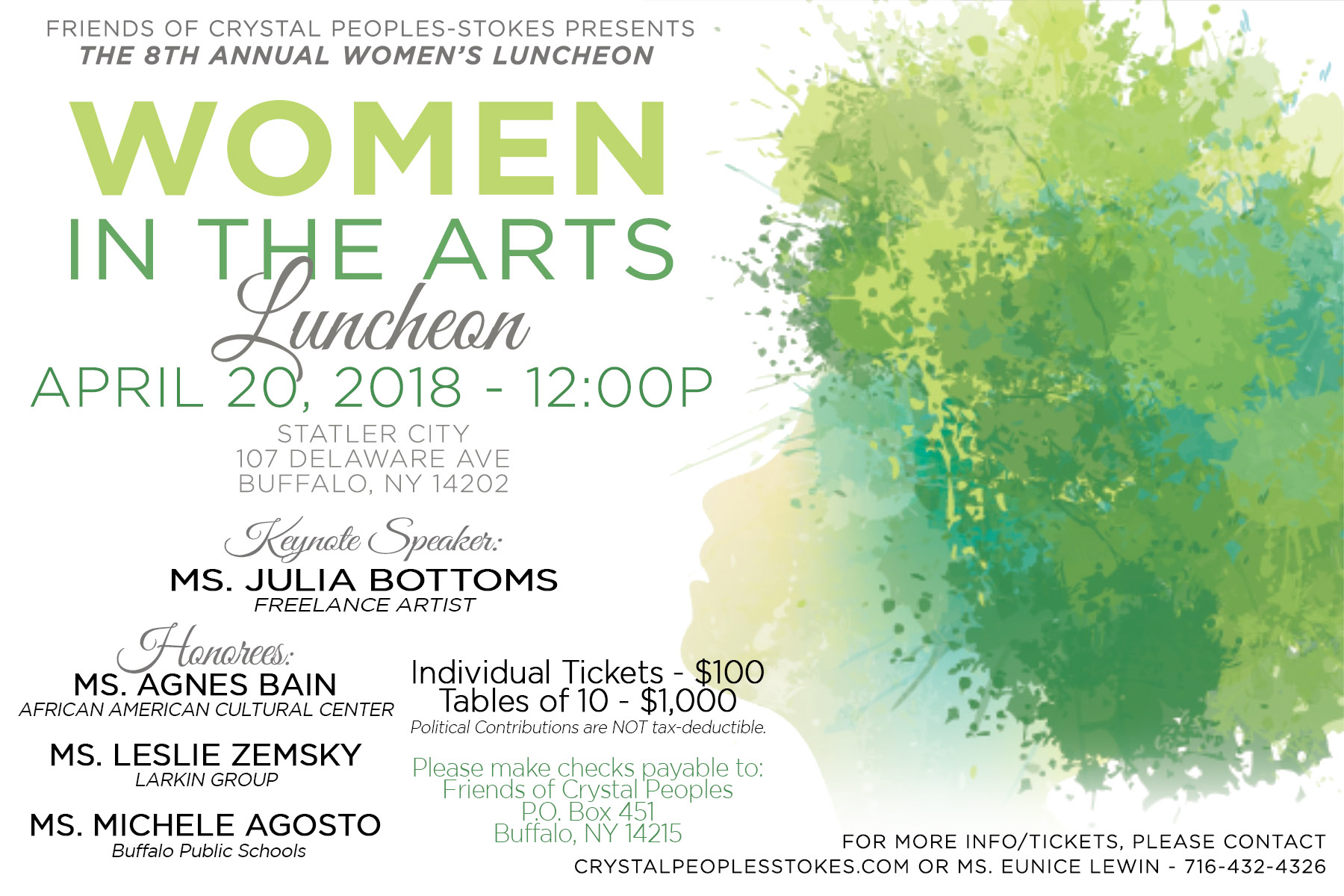 We need Crystal Peoples-Stokes in the Assembly.

From being a driving force in the thousands of new jobs coming to the City of Buffalo to securing $56 million in classroom technology for the Buffalo Public Schools, she’s delivering for our community. Her leadership is crucial and we need her representing us to keep delivering for our neighborhoods.

That’s why I’m asking you to join me in voting 10A for Crystal Peoples-Stokes this Tuesday, September 9th.

Not sure where to vote? Go look it up now!

Polls are open from 6 AM to 9 PM. Since this is such an important primary, Crystal really needs you to turn out on Tuesday. When will you be going to vote for Crystal?

The obvious choice is the incumbent, Crystal Peoples-Stokes. Peoples-Stokes understands the position. She is well-versed in making Albany work for her constituents and she brings a strong sense of ethics to the job. And, significantly, she is interested in continuing to grow and to learn new things – and does so.

Today I joined Governor Cuomo, Mayor Byron Brown and a number of other colleagues, as the governor signed a anti-heroin bill into law. The signing is designed to curb the use of heroin and heroin related deaths in New York State.

12:20am in NYS Assembly Chambers, my City of Buffalo Traffic adjudication bill passed by unanimous vote. Long overdue, but worth the wait. As soon as the bill is signed by Governor Coumo, Buffalo, like most other cities, will have the ability to maintain local control of the adjudication process for…